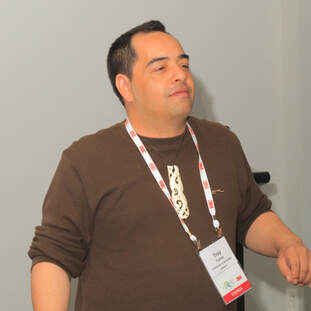 ​In this column we interview LIS professionals – finding out how they got to where they are and any advice they have for students or new professionals. Our second interview subject is Troy Tuhou, Team Leader, Library Executive, Auckland University of Technology.
HH: Kia ora Troy and thanks for sharing your career pathway with our readers. First up; can you tell us about your current role? What is your job title and what do you do day-to-day? Can you also tell us what qualifications you have?
TT: Kia ora koutou katoa, I am currently the Team Leader for the AUT South Campus Library Community Engagement team. My role as team leader is varied and includes managing the day-to-day operations at South Campus Library including care and maintenance of the collection, facilities, furniture and equipment. I also manage the South Campus team and consider myself to be an enabler, ensuring that they have the resources and equipment to do their job, but also helping them to develop their skills. I also think that a part of my job is to represent the library at our South Campus by building and maintaining strong working relationships with other AUT departments with services here at South Campus.

I have a BA (Bachelor of Arts) with a double major in Education and Māori Studies from the University of Auckland and an MIS (LIBS) Master of Information Studies (Library Science) from Victoria University in Wellington.

HH: Is this the career you always intended to go into?
TT: Surprisingly this was not my intended career, and not once had I considered the information profession as a career pathway when I was at college.
Initially I wanted to be a primary school teacher because I remembered how good my teachers were and how they had instilled a desire to learn, and encouraged my curiosity.

HH: That’s really interesting, Linda Palmer had a similar experience there seems to be a connection between those two careers, I guess they are often seen as a calling and they both involving guiding people to knowledge? What do you think?
TT: Yes there are a lot of similarities between the two professions, in fact librarians  will probably know at least two or three colleagues who have some form of background in teaching or education.

I think for me it was the light bulb moment when you see that glimmer of understanding in a person’s eyes, either teaching them in an educational context or showing them some resource or search tip. I guess a lot of people don’t realise that there are teachable moments all the time in our profession.

HH: So, what was the deciding moment for you that made you choose to go into the LIS sector?
TT: The University of Auckland had a scholarship for full-time Māori and Pasifika staff who wanted to do the MIS, and for almost a year I was asked regularly if I was interested.

Even after almost a year at Lending, I wasn’t sure if the information profession, particularly librarianship was truly for me. However what really made my mind up was attending my first Te Rōpū Whakahau hui-a-tau (conference).

At that first hui-a-tau I meet other Māori in the field, and I remember distinctly two speakers. Taina McGregor who spoke about her role as an oral historian, travelling the country helping whānau to preserve their kōrero or stories (also I recognised her immediately as a fellow Ngāti Porou) and Tharron Bloomfield who talked about his being part of the NZ group who helped with the preservation of the Niuean government documents after a cyclone
After both of these talks I decided that I would apply for the scholarship and to Victoria – I wasn’t convinced that I would be accepted but if I didn’t try I wouldn’t know… and here I am now with an MIS (LIBS)

HH: What was your idea of what librarians are and what they do before you became one?
TT: I don’t remember actually thinking about it, they were a part of my life as we had a whānau tradition as children of walking to the public library every Saturday, returning our books or puzzles and taking out new ones. The library staff were there but it was the physical spaces and books that I noticed more.

HH: If you were meeting someone who had just finished their undergraduate degree and was contemplating doing a postgraduate LIS qualification what would you say to them? What sort of personal attributes do you think you need to go into LIS work? Particularly working in the tertiary sector.
TT: I would suggest volunteering at the local public library, or applying for entry level library positions before enrolling in a qualification. This would help to remove any preconceived notions about librarianship and also give them an idea of the huge variety of roles that are available in our profession.
I think the personal attributes I look most for are adaptability, a willingness to learn, and most important to me is the desire to help people. I think that although there are significant differences between the types of library in terms of our focus and user, at the end of the day we are all here to help people in whatever shape or form that takes.

HH: You did some interesting work for the LIANZA Emerging Leaders Kōtuku Programme can you tell our readers a little about that?
TT: Firstly the success of the LIANZA Emerging Professionals Working Group and the Kōtuku Emerging Leaders Programme which came from their recommendations has to go to the working group. I played a very small role in the working group, and I still joke about being there when Kōtuku was a twinkle in LIANZA’s eye. It was little more than a strategic objective about Emerging Leaders written on a whiteboard at my first full LIANZA Council meeting.
I was the Te Rōpū Whakahau representative on LIANZA Council and found eyes of my Council colleagues s on me when we were looking for champions for the various working groups. I felt I had only been there five  minutes but said I would if I could have a co-champion. As we are both in Auckland, Kim Taunga offered to be the other councillor.

The original chair was Paul Nielsen, and I think Christine Busby was the secretary and then took over Paul’s role when he moved to Australia.  Paul and I had a great meeting via phone, where we set down expectations and ideas about what emerging leadership might look like. I assured him that I saw my role as a conduit between the working group and council, ensuring they had the necessary resources for the job at hand. Kōtuku was one of a number of recommendations all of which were implemented and supported by LIANZA Council.

I applied to be a part of the second cohort however was thankfully rejected based on the fact that I wasn’t an emerging leader but had well and truly emerged. I was then offered a place in the working group and worked with them to help develop the second and third cohorts.

HH: It’s great to hear about the Kōtuku programme. Can you share with us what personal attributes you see in people that make good leaders?
TT: Good leaders need good communication skills, courage, empathy, consistency, trust worthiness, and to be fair minded.

HH: Do you have any top tips for people who want to work on their leadership skills – are there any basic things they can do to build a foundation of skills?
TT: I guess if you want to work on your leadership skills, look for opportunities to lead, and remember that leadership is not management! You can lead from any level of your workspace. Organising a morning tea, or put your hand up for projects that come about. Find people you think are great leaders in your institution and try to be in their presence so you can observe them, make mental notes of things they do, or say. If you are confident enough you might also want to ask them for a little bit of their time so that you can ask them about their leadership, and tips that they might have.

HH: Anō te pai!  Thanks so much for your time Troy!