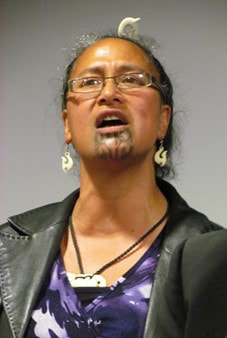 Nāu te rourou, nāku te rourou, ka ora ai tātou.
With your basket and my basket we will sustain.
​
Anahera was born and bred in Tāmaki Makaurau Auckland in the rohe of Ōrakeiiriora, on the whenua of Takaparawhau, also called Bastion Point. She livedin Mangere and Mahurangi West moving as her whānau got bigger, and eventually returning to Ōrakei.
​
Her whānau travelled a lot when she was young through Northland where they have whenua. She did not realise until she was in her twenties that she belonged to many of the iwi from that area as well.
“I didn’t realise I was Māori until about eight years old. My sister came home from school one day and sat on my dad’s lap, she said, “Dad did you know there’s Māori at school?” He said really who are they? Because we didn’t distinguish between who was Māori and was not, at Ōrakei school – most of us were.”

​Anahera’s grandparents were part of the generation not able to speak their reo at school and she was raised speaking English.

​“I used to do a lot of labouring work before I got into whare taonga (libraries). I was one of the first four women employed as a stevedore by the Ports of Auckland, driving machinery and lashing down containers. But my son was getting older, and I was spending all my time in shift work while he was raised by my mother.” Anahera decided it was time to look for a new career and started teaching information technology at Aims Resources.

Another change in career to libraries followed, as the personal assistant to the Tumuaki at Auckland Public Libraries, Bernard Makoare. “He was doing some mahi with Ngāti Whātua Ōrākei as they were wanting to build an archival centre that included a museum, archives, library, and education facility to learn crafts around raranga, toi whakaro, whāriki, and tukutuku, to bring those skills back to Ngāti Whātua Ōrākei. They wanted someone to work on this who had the skill set and was from the area.” Anahera took up this challenge. This was when she began her training at Te Wānanga o Raukawa in the Puna Maumahara programme in Māori information management. It also put her on a journey into her te ao Māori side.
From there she got a role as the Kaiārahi at Auckland Public Libraries as team leader for the Te Rōpū Ratonga Māori. Later she moved to a role as Kaiwhakahaere Māori at the University of Auckland Waipapa Taumata Rau.

Anahera is an on-the-job learner, improving her skill set through experiences in her mahi and through opportunities with LIANZA and Te Rōpū Whakahau. She was LIANZA President in 2020-2021 and Tumuaki of Te Rōpū Whakahau in 2010-2012. She also served twice on the LIANZA Council, was involved in LIANZA Hikuwai community, and on the LIANZA Standing Committee on e-lending and digitisation. She has been a stalwart member of Ngā Upoko Tukutuku Governing Group.

Anahera is a strong supporter of LIANZA’s professional registration scheme and was a board member between 2014-2022.
​
Anahera was instrumental in the adoption and implementation of the BOK 11 component of the LIANZA professional development scheme. Since its adoption, BOK 11 has been a practical measure for new and current LIS professionals to demonstrate and grow their capability and competency to engage in a bicultural New Zealand context.
​
In 2020 and 2021 Anahera was a judge and convenor for the Wright Family Foundation Te Kura Pounamu Award for Te Reo Māori for the NZ Book Awards for Children and Young Adults.
In early 2022 she was appointed as the Kaihautū Rātonga Māori - Director Services for Māori at Archives New Zealand Te Rua Mahara o te Kawanatanga. Archives New Zealand’s intention for the Kaihatū role is to provide the resource needed to make the changes necessary for the future. In this role, Anahera says, she makes good use of her skill set.

“Bringing Nga Taonga Sound and Vision, the National Library of New Zealand Te Puna Mātauranga o Aotearoa, and Archives New Zealand Te Rua Mahara o te Kāwanatanga (known together as Te Ara Tahi) under the one umbrella of Te Tari Taiwhenua, gives people of Aotearoa better access to the taonga that they want and better service for our communities.”

One of the changes for Archives New Zealand and Te Ara Tahi is that Māori will be kaitiaki for their taonga tuku iho. This is a big shift for the sector, she says. It means expanding the sector to rethink the way they are engaging – less about getting people in the door and more about making taonga digitally available. It’s also about engaging more with iwi and hapū, using a te ao Māori lens to relook at what taonga are, and telling histories from an iwi Māori perspective.
She has since stepped into the Chief Archivist role for the interim. Being able to take on this role allows her to lead this work further bringing her team with her. Archives New Zealand have recently announced their Utaina project with National Library and Ngā Taonga Sound and Vision to digitise audio and visual media.

Internationally, Anahera has been an effective and influential representative for Aotearoa at the International Federation of Library Associations (IFLA). An example of this is in the development of the indigenous knowledge framework that was included by the IFLA Education and Training Section and confirmed in 2012 as part of the IFLA body of knowledge.
​
Anahera received a Te Rau Herenga o Aotearoa LIANZA Life Membership award this year, the first time it has been awarded since 2015. The citation for her award included these comments:

“Anahera continues to be generous with her wisdom supporting Mātauranga Māori and championing indigenous knowledge management.  LIANZA Council is delighted to award Anahera an honorary life membership. She has given Te Rau Herenga o Aotearoa far more than we can ever offer in return.”