Our UNESCO City of Literature - Dunedin

Macandrew Bay. Image credit: Dunedin City Council
This feature is a follow-up to UNESCO Memory of the World Programme article in the last issue. We shine a light on Dunedin, our UNESCO City of Literature, learn how the status was achieved and what it means for the city, the public library and the community.

The UNESCO City of Literature programme is part of the wider Creative Cities Network, which now boasts 246 cities around the world. The Creative Cities network features seven creative fields; Crafts and Folk Art, Design, Film, Gastronomy, Literature, Media Arts and Music. The first UNESCO City of Literature was Edinburgh in 2004. There are now thirty-nine Cities of Literature, spanning twenty-eight countries and six continents. UNESCO Cities of Literature share similar characteristics including existence of libraries, diversity of publishing, literature playing an important role in the city. Dunedin became a UNESCO City of Literature in 2014.
In our part of the world there are only two UNESCO Cities of Literature - Dunedin and Melbourne. New Zealand now boasts three UNESCO Creative Cities - Auckland was accepted as a UNESCO City of Music in 2017 and  Wellington was designated a UNESCO City of Film in 2019.
Dunedin is a magnificent example of a small city that connects people through its culture and its intense love of literature. The journey to achieving City of Literature status is one of teamwork and determination.
I initiated the process within the Dunedin City Council and we collectively planned and promoted the bid locally with the Dunedin literary community, Society of Authors, University of Otago and other stakeholders as well as liaising with national stakeholders  including the New Zealand Book Council, National Library of New Zealand, New Zealand National Commission for UNESCO. Liz, Noel and Annie wrote most of the bid document and I liaised with the existing Cities of Literature at the time. Liz also created some wonderful graphic materials and represented Dunedin as a City of Literature after our designation and before the appointment of our current director, Nicky Page.
​
The library also initiated and coordinated bi-monthly collaboration group meetings for interested individuals and representatives to share ideas, projects, upcoming event information, with 50+ people regularly attending. This collaboration group still continues and is held in the Dunedin City Library. We had some advantages at the time; our Mayor Dave Cull was a published author and was hugely supportive as was the whole Dunedin City Council, which also included Neville Peat, another published author. In addition, Edinburgh and Shanghai are two of Dunedin’s Sister Cities and also both UNESCO Creative Cities (Edinburgh – Literature; Shanghai – Design).

Are you currently engaged in any projects around the Cities of Literature initiative?
Yes, I am currently working with the Edinburgh City Libraries and Information Services on a range of collaborative projects. We have had a number of Skype sessions with our management teams and have started to share information and project ideas. I have also approached Dublin, who appointed a new City Librarian last year, to re-establish the relationship, and I have also approached Norwich, Nottingham and Melbourne. My plan is to see if we can foster the relationship with Edinburgh and Dublin, then expand to the public libraries in other UNESCO Cities of Literature as time and priorities allow. This process has been paused due to COVID-19 but I’m hoping to revive it when circumstances permit.
​
Have you seen an increase in local government support for libraries – or public interest in them – since Dunedin became a City of Literature?
Within Dunedin, the public library is closely aligned with the City of Literature as a key stakeholder. We offer public programmes that are developed with and co-branded with the Dunedin City of Literature and have a dedicated City of Literature focal point in our main City Library. In addition, we have started an ongoing project to tag Dunedin authors, illustrators, poets, writers, in our catalogue and on the physical items, and regularly feature displays of Dunedin authors. The Dunedin City of Literature logo is also featured on selected merchandise. There is huge local support for the City of Literature, with the designation supporting the re-establishment of a biennial literary festival – Dunedin Writers and Readers Festival. The Dunedin City Council currently provides the funding for a full-time director and part-time project co-ordinator for the Dunedin City of Literature. Rather than increasing funding levels or support, I think the close relationship between the Dunedin City of Literature and the Dunedin Public Libraries has further embedded the library as a vibrant, relevant and diversified community service.​
We don’t want to put on competing events, we want to enhance existing programming. Sometimes we can offer a free venue in the library, thanks to Bernie, Emma Caradus and the team, for groups seeking a space in which to perform or launch their work. Other times we might work with the University Book Shop, Dunedin Writers & Readers Festival and NZ Young Writers Festival, which hold some events in the library (and we share some events). We want to help people to get the audience and coverage they deserve. We are celebrating what’s happening here and shining a light on it around the other 38 Cities of Literature.

Wow, it sounds so important that Dunedin is a city where the arts community is connected and I’m imagining there’s some cross-over; that having these disparate parts connect is vital to the success of Dunedin being a City of Literature.
That’s exactly right, collaboration is key to its success. The collaboration group convenes a few times a year in the library. That group comprises people across the arts, particularly writers, illustrators, publishers, booksellers, academics and teachers, and also the Hocken is a key partner, festivals, Otago Access Radio, other arts organisations plus the art gallery and museum. It is a group made up of people who are interested and want to intersect with the City of Literature in some way.

We are very inclusive and keen on bringing everyone in, so that group is self-selecting. They come along to discuss what projects they are working on - we go around the room sharing - and it’s amazing the synergies that come up and people can work on things together and connect on projects. As well as keeping members in contact, it leads to tangible project outcomes and again that collaborative working style is very important for the way Dunedin runs its City of Literature programme. Some of the other Cities of Literature are much bigger, of course, such as Melbourne - so they operate in a different way. Our advantage in being smaller is that we can connect so widely across the community and have a high level of engagement and collaboration with all the huge talent we have here, which is a very enjoyable way to work!
Another thing the City of Literature has done with the library is run a programme called Little Landers Literature, which is an alliance with the Highlanders rugby team that encourages a love of reading for primary school children. The Highlanders really got behind this project, they took it on as part of their professional development. They had someone speak to them about the importance of literacy and how it changes life outcomes across a whole range of areas. They really embraced the project and were fantastic to work with. We initially did a photoshoot with them holding some local writers’ books in the Octagon and, to start with, the Highlanders were all looking very earnest and serious, they were looking quite sombre. I encouraged them to look as if they were having fun and we had a great time with the photoshoot, we got some beautiful photographs and made posters for schools. For the most part, the programme visited schools. Two players visited each school in the programme regularly and they got to know the children. They’d read to each other and sing waiata and talk about their favourite books. When the players were away they’d send back videos encouraging the children to keep up their reading. One of the players said in his video to the children “I try and read three times a week!” - it was lovely. In the library, we ran a parallel stream in te reo led by Paulette Tamati-Elliffe and Komene Cassidy. There are also two players fluent in te reo and the Kura students attended. So the sessions were run entirely in te reo with books written in te reo, games and waiata. The library was a great central location where everyone could meet.

You are so busy! Librarians are so used to working off the smell of an oily rag and you are modelling such a great way of working together so you can all make the most of your combined resources through collaborating and connecting. It’s a great way of working. And, although not every city can be a City of Literature, there must be ways that other regions can look to your working model and draw on it for planning and programming.

Yes, we are trying to make everything richer and better with the resources available. The expertise and passion the library staff have are second to none, I’m so lucky to have these incredible colleagues across the library who engage with the City of Literature in different ways. Everybody is such a pleasure to work with. We also work across the country in the same, collaborative way and connect with international groups such as literary festivals. It’s important to me that New Zealand writers get more of the attention they deserve. We want the reading public to reach for New Zealand books and to realise that they are always as good, if not better than international titles. The end goal is to be constantly putting the books in front of readers, who invariably love them and don’t look back.

You are such a  champion for New Zealand literature Nicky, I think that we are really lucky to have you.
Thank you, it really matters to me! It’s such a privilege to work with the writers, it’s incredible what comes out of the city and the country every year - it’s just phenomenal.

Thank you so much for your time and passion Nicky! 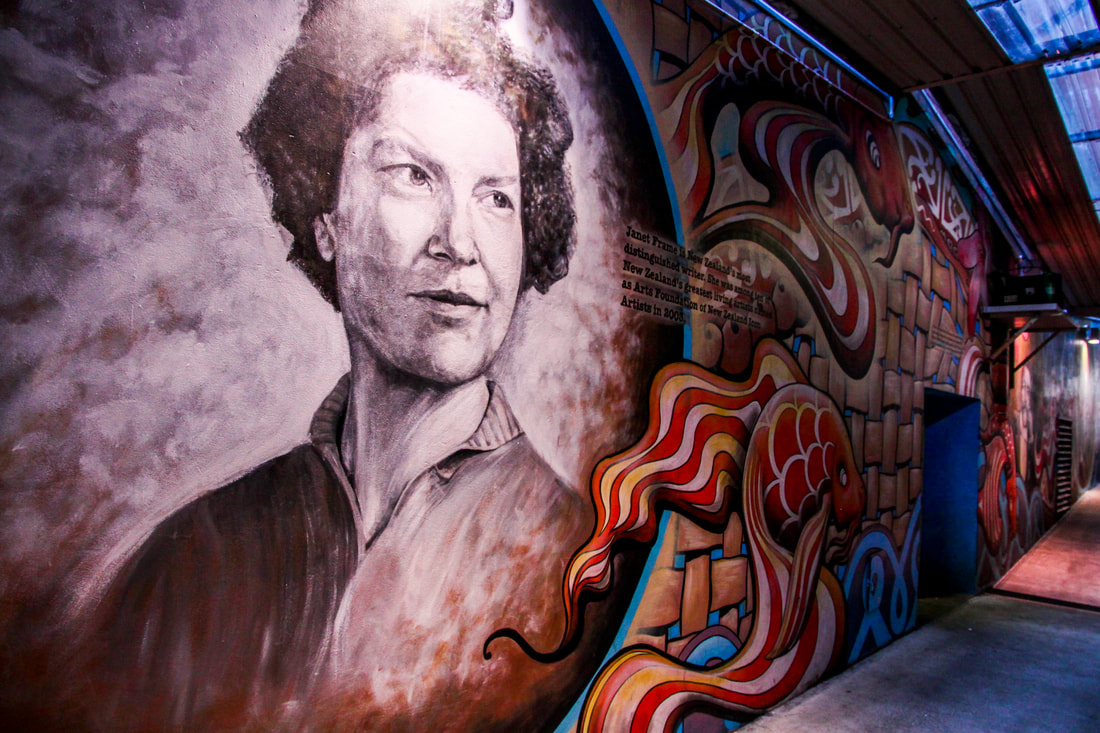