​‘In the Vault’ –  a musical collaboration

You can listen to Dr Brown talk about the project with Lynn Freeman on National Radio and play a section of tracks from the collections.
The ‘In the Vault’ playlist presents a journey through New Zealand and Polynesia’s diverse musical past, from Māori waiata to retro pop, island ukulele bands to jazz combos, art music to brass bands. The selections will be regularly refreshed.

Content has initially been drawn from the extensive back catalogues of two record labels, Viking and Video Pacific Communications (ex-Ode Record Company), who have donated their master tapes to the National Library. Music is also included from the CD series He Puiaki Puoro Treasures in Sound, produced by the National Library mainly in association with the Atoll label.

In 2018, Flying Nun Records donated their master tapes to the Alexander Turnbull Library, to be preserved and digitised. The library hopes that music from this collection will be included in time. They also hope to present recordings of works by Douglas Lilburn, the founder of the Archive of New Zealand Music, and other composers.
Viking Records was founded in 1957 by Ron Dalton, Jim Staples and Murdoch Riley, who became the sole owner in 1968. The Viking collection also includes masters from the labels Salem, La Gloria and Red Rooster, which were later acquired by the company.

Viking was the largest independent New Zealand label of the 1960s. Its roster included many local pop sensations of the day, including Dinah Lee, Howard Morrison, Peter Posa, Maria Dallas, and the Chicks. Other specialities included country, brass bands, and cabaret.

The label released numerous LPs by Māori cultural groups and was also very active in recording Polynesian musicians. These include Pacific-born migrants to New Zealand such as Bill Sevesi, Bill Wolfgramm, Will Crummer, and members of the Keil family, as well as many groups located back in the islands.
HH: I guess you were one of the few that were at the cutting edge back in the day, prioritising New Zealand music?

MR: It really came about because my first job, which I started in 1945, was in government broadcasting. I worked there for nine years and ended up being the person who ordered popular and classical records for the station. Later I worked in 2ZB in programming, so I got a great sense of what the public wanted and realised that, if I were to go out and start a company then I should concentrate on that popular music.
​
I got involved with popular music, Country and Western music, Island and New Zealand recordings. So, I went out on my own, after I left Radio Corporation (who were a major distributor of records through the Columbus Radio shops) and I had learned an awful lot working with them.
​
HH: Yes, you’ve got quite an amazing back catalogue now. One of the books that springs to mind is Maori Healing and Herbal.

MR: Well I’ve done a great big one for the proverbs too – I’ve been working hard at revising Wise Words of the Māori. It’s got a new index so it’s much easier to search now. It’s due out March or April.
​HH: Peter Posa, he was a character.

MR: He died only last year. His was a pretty sad story – becoming ill and losing his creative abilities as a guitarist to an extent. He could play the guitar but he didn’t have the excitement he’d had in the early recordings. Mind you, I think the carrots helped.

MR: When we came to release his LP White Rabbit how would you promote it to the disc jockeys? We sent out carrots and it got their attention! Which was something we had to do at an early stage in the record industry. We had to fight to get our records on the air because the disc jockeys didn’t want any local recordings at all. In those days the musicians could be toured around New Zealand, possibly Australia and very rarely, perhaps, to England and that was about it. We took Maria Dallas to National and got her on RCA but it was a struggle. It’s lovely to see New Zealand musicians performing all around the world now and the standard of recording has gone up.

MR: Yes, and it’s interesting now to see from the royalty returns where people are listening to our music – what countries. As far as the money is concerned it’s peanuts, you get almost nothing. People like Lorde would do very well but for our material it’s run of the mill stuff and quite old. 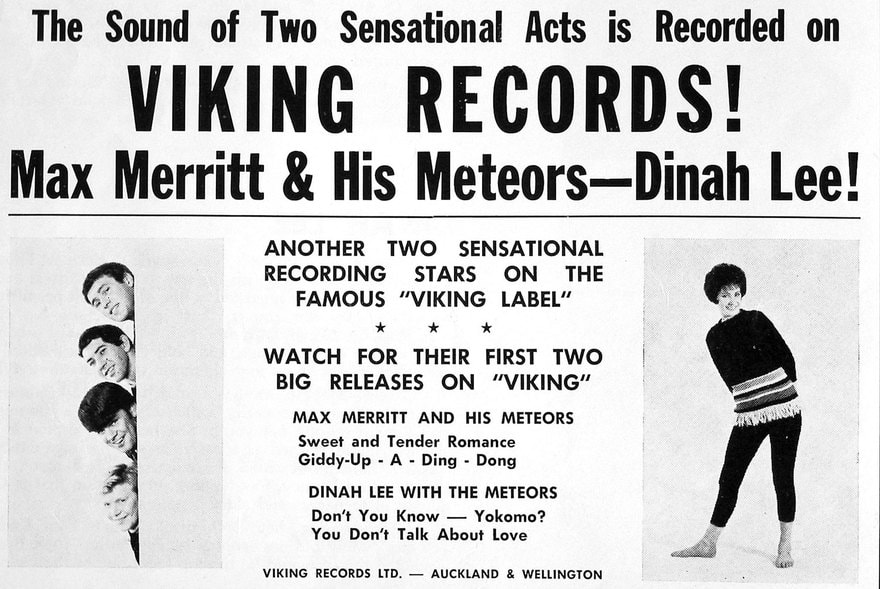 ​HH: What countries do you see royalties coming in from?

MR: You name it! Royalties from European countries are collated before we see them so we don’t see the individual countries, but the UK comes directly. Lots of African countries, Indonesia. We did a recording, which was aimed at the Polynesian market, of The Twist (not in English) and it's taken the fancy of the Indonesians. Over the last two months seven or eight thousand people have listened to it. Payment is only about one cent a listen though! Nevertheless it’s fantastic to see where the interest lies. For example, we did a live recording in 1958 or 59 of Flamenco music performed in the Wellington Opera House and we’re now getting returns from Europe, presumably from Spain.

HH: Where online is your music available?

MR: Apple and Spotify, it’s all part of the process to make the material available right around the world. It costs me money, it doesn’t make me money, but it’s well worth it to have our music available. So, I’ve extended past the pop music to brass bands and so on, so people can see the range we have.

HH: How many albums has the Turnbull Library got through so far? How many more years are there worth of recordings to go do you think?

MR: I can’t talk figures, other than to say that I’m up to about 5,000 individual tracks available online. Of course, I’m nowhere near finished, I’ll probably never finish the whole catalogue!

MR: What I’m doing now is going through a whole series of Polynesian recordings, which have sold well in different Islands, and making that available. Including a number of tracks that the National Library didn’t know about because they were never issued in New Zealand. We recorded them and made them available in Fiji or New Guinea – pressed them and made them available to the countries concerned – but didn’t worry about New Zealand. Now about a third of royalties for the Polynesian music is from New Zealand.
​Listen to 25 Solid Gold Māori Songs on Spotify.